The Process of Design is an iterative process. And I think I will iterate a couple of times to fill in more details about the game that I am making.

When I went through the process the first time, I was able to get a clearer idea of what I want to make- something similar to “That Dragon, Cancer”, “Dear Esther” and “The Sailor’s Dream”. And I learned about the term “empathy game”, as well as learned more about how games like “Dear Esther” explore narrative.

The first iteration will focus on the story or the topic that I’d like to explore, which is about depression and mental health awareness.

The second iteration will focus more on the art style and how I can present the game.

The third iteration will focus on game play, core mechanics, interactivity and controls.

The fourth iteration will focus on sound.

And hopefully, by the fifth iteration, I will have an even clearer idea of what I want to do. Also come up with Product Overview and the core features of the product, from User Interface, Interaction & Mechanics, Controls, Narratives & Levels, aesthetic styling, technology & AI.

Depression Quest is an interactive fiction game where you play as someone living with depression. You are given a series of everyday life events and have to attempt to manage your illness, relationships, job, and possible treatment. This game aims to show other sufferers of depression that they are not alone in their feelings, and to illustrate to people who may not understand the illness the depths of what it can do to people.

The goal of this game is twofold: firstly, we want to illustrate as clearly as possible what depression is like, so that it may be better understood by people without depression. Hopefully this can be something to spread awareness and fight against the social stigma and misunderstandings that depression sufferers face. Secondly, our hope is that in presenting as real a simulation of depression as possible, other sufferers will come to know that they aren’t alone, and hopefully derive some measure of comfort from that.

It goes without saying that because of the very nature of depression, it is experienced differently by every person who suffers from it. We aren’t trying to say that this is the “best” or “most accurate” representation, merely that this is an amalgamation of the experiences of the developers and several people close to them.

Zoe Quinn, the developer of “Depression Quest” talks about Games and Mental Health:

Actual Sunlight is a short interactive story about love, depression and the corporation. The game puts you in the role of Evan Winter, a young professional in Toronto, as he moves through three distinct periods of his life.

The story is linear, unavoidable and (hopefully) thought-provoking. You experience his perceptions, fall under the consequences of his decisions, and meet everyone who didn’t change him. Gameplay is minimal, and serves only to move from one part of the (admittedly) text-heavy story to the next. The game fiercely attempts to be worth it.

And it comes with a disclaimer:

It also deals with extremely mature themes, including depression and thoughts of suicide. Similar to other forms of art that tackle these issues, Actual Sunlight can be an extremely powerful emotional experience – before downloading it, please first consider what your reaction to a book, film or piece of music in a similar vein might be.

Dreams of Your Life

Hide&Seek worked with Film4 in producing a unique and innovative multiplatform experience to support the release of Carol Morley’s feature film Dreams of a Life.

Dys4ia and The Empathy Game

“Dys4ia” is a journal game about the six months of my life when I made the decision to begin hormone replacement therapy.

“The Empathy Game” is giving players the opportunity they’ve been waiting for for three years: to literally walk a mile in Anna Anthropy’s shoes.

Elude explores the complex landscape of mood by creating a metaphorical gaming experience. The goal is to raise awareness and understanding among the friends and family members of those who suffer from clinical depression.

“Elude” plays and reminds me of “Limbo”. And it’s interesting the way it represents depression is a figurative manner through climbing up trees and reaching the sky, and then falling into a dark pit.

The Town of Light

12 March 1938. Renée, 16 years old, is ripped out of her world, locked up and deprived of everything. Her only fault was that she didn’t know what her place in the world was. “A danger to herself and others and a cause of public scandal” wrote the police headquarters. The only horror you will find in this game is the truth: a blow to the solar plexus, much more intense than any supernatural presence.

The Town of Light is a psychological adventure told in the first person. The story is set in Italy in the first half of the 20th Century in a place which really existed and has been meticulously reconstructed. Exploring and interacting with the environment you will relive the history of the main character through her confused viewpoint and on the basis of your choices, the story will develop in different ways.

Re-Mission 2 games help kids and young adults with cancer take on the fight of their lives. Based on scientific research, the games provide cancer support by giving players a sense of power and control and encouraging treatment adherence.

Each game puts players inside the human body to fight cancer with an arsenal of weapons and super-powers, like chemotherapy, antibiotics and the body’s natural defenses. The game play parallels real-world strategies used to successfully destroy cancer and win.

More about HopeLab and their mission:

Re-Mission 2 is a project of HopeLab, a nonprofit that harnesses the power and appeal of technology to improve human health and well-being. The games are an evolution of the original Re-Mission, inspired by the vision of HopeLab founder Pam Omidyar to fight cancer with gameplay. All Re-Mission games are designed in collaboration with medical professionals, game developers and young cancer patients.

Me, Earl and the Dying Girl 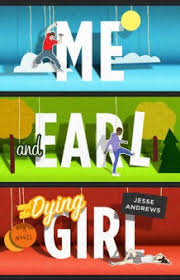 In the book and movie, the main character creates a movie for his friend who is dying from cancer. I like the comedic way it presents such a dark topic.

The Synthesis and Refinement bit are currently in a  private post.