It’s been two weeks and I still can’t really nail down what the game mechanics are. It’s frustrating and it’s making me feel really unproductive. But that’s what exploration is about, right?

But I think (I think), I’m closer to a breakthrough…

I’ve mentioned “Everyday the Same Dream” a couple of times already. I just replayed the game again. actually. (If you haven’t played it, play it, it’s good.)

The game starts off with the main character waking up, then he can walk over to his closet to get dressed (or not, it’s your choice).

Then he walks to the kitchen where his wife is making breakfast.

Then he walks to the hallway, and presses the elevator button. He enters the elevator and he can talk to the old lady inside, who tells him a cryptic message.

Then he leaves his building, then drives to work.

He gets to work, gets yelled at by his boss, then he proceeds to walks to his cubicle, sit down and work, and the day is over.

And the cycle repeats itself.

But you can make different choices and that would affect his outcome.

According to its creator, Paolo Pedercini:

“Every day the same dream” is a slightly existential riff on the theme of alienation and refusal of labor. The idea was to change the cyclic nature of most video games with some kind of meaning (i.e. the “play again” is not a game over). Yes, there is an end state, you can “beat” the game.

Michael McWhertor, when writing about the game, says:

Don’t think of Every Day The Same Dream as much as a game (though it is), but as an interesting, potentially fascinating experience…

There’s often a temptation, with art games, to analyze what they are trying to “say.” Every Day The Same Dream is most useful when viewed as an example of how the specific nature of video games — with interface, interaction and natural player tendencies — can be used to offer experiences that passive media can’t possibly.

A world rendered in two dimensions, where left and right are the only comprehensible inputs, suits the world Pedercini has built to challenge its hero; the game is designed specifically for a player’s natural tendency to explore and push the boundaries of game design. And their desire to do so organically dovetails with the wishes of the drone-hero: The player wants to test the constraints of the game world just as much as the character wants to test the rules of his.

Players may not realize that their existentialist struggle is reflected in the gameplay itself until they’ve already completed the game. The mechanics serve the experience; they aren’t the experience in and of themselves.

Extra Credits talks more about using mechanics to serve the experience in a series of videos, using a Flash game called “Loneliness” as an example.

In the video he also poses some questions:

And he says that after you have figured that out, it’s one step close to making a meaningful game.

Okay, I know what I want to talk about (at least I got that one down). But not much else.

I want to let people feel how I (and a whole bunch of other people) feel.

There was a video that I saw on my Facebook feed that kind of captures that feeling, at least for me.

While I was looking for that video on YouTube, I saw a few more (mostly from Buzzfeed).

Okay that one was… something. It sort of hits home, because that’s me.

And this very powerful letter to depression:

Another YouTuber, Charlie Mason starts the video with: “A lot of people ask me what it feels like, but the only way that anyone can understand it is if they were to experience it themselves…”.

For me it’s the struggle of getting up every morning, going through the day while pretending to be okay.

Tiredness clinging to the edges of my sanity.

When I finally make my way to the door I breathe deep before I exit.

Smile at the neighbor
Wave at the garbage man

My mask is firmly in place hiding the fact that while deep down I have feelings, they’re wrapped in so many layers of cotton insulating me from the horrors and wonders they contain.

I wear colorful clothes, smile as I pass people in the hall

…and then return to my cave
Hanging up my mask, and those clothes

To wear another day.

Depression lies in between two places. It’s almost like my mind is in limbo. This is why I try to constantly stay busy. As this relates to a video game, I think the uncertainty of depression can be represented as a sort of limbo. When a protagonist is on a quest/adventure, perhaps the task at hand isn’t completing the quest, but simply trying to be on it. I’m imaging a game where the character is only trying to avoid limbo. It’s not about finding the treasure at the top of the mountain. It’s about getting to the top only long enough to chase after the mountain on the other side.

Nathan Yau visualizes the Average Day of an American beautifully, and says:

So again I looked at microdata from the American Time Use Survey from 2014, which asked thousands of people what they did during a 24-hour period. I used the data to simulate a single day for 1,000 Americans representative of the population — to the minute.

More specifically, I tabulated transition probabilities for one activity to the other, such as from work to traveling, for every minute of the day. That provided 1,440 transition matrices, which let me model a day as a time-varying Markov chain. The simulations below come from this model, and it’s kind of mesmerizing.

And my day is also pretty similar:

Okay, now let’s simulate that, in a less boring way.

I remember this children’s app called “Fiete” with different mini games that are essentially his every day life. 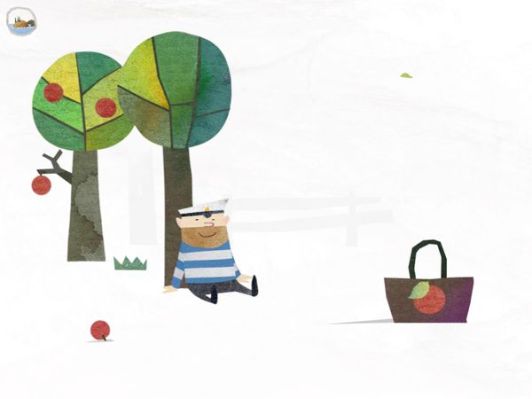 And from there I looked into other children’s games, like “Sago” and “Toca Boca”, and children’s books.

A book about telling time, “It’s about Time” by Stuart J Murphy , with a page for each hour:

Kids sure have a lot of free time, and a lot of imagination.

A few years ago the theme for Global Game Jam was “ritual” and we actually created a game about a dog’s life, in “Everyday the Same Dream” style.

For navigation I’m thinking it’s predominantly point-and-click to interact with objects (or maybe pinch to zoom into a different scene, and then pinch out to go back to the main scene…?), then swipe to move to another scene (the character will walk towards that direction when swiping, when you let go, the next scene with “bounce and anchor”, you know like how swiping pages usually work in iPhones).

Either that or the main elements are in the black and white silhouette style and the background will be a video of sunshine or rain (depending that state of depression).

Maybe it could start with the first day, which is a normal day, a good day. And then at some point it starts raining. That sort of symbolizes how it feels like a rain cloud to me, and it just hits, catching you completely unaware.

That could be the collage-y bit that I’d like to incorporate.

A little bit like the window in “Dreams of Your Life” and how the season changes to depict time.

This is quite a long post, so I’ll end here and then start working on a prototype.