So I haven’t done a game jam in a while (after I failed my #nar8). And I wasn’t really planning on doing #indiesvspewdiepie.

But then my lil sis and I woke up on Saturday and saw that one of our colleagues were doing it, and we’re like yah, we should do it too.

But first French Toast with eggs and bacon, sprinkles (because why wouldn’t you add sprinkles. actually, it’s my first time adding sprinkles on my toast, and yah, you wouldn’t, you shouldn’t).

My little sis sketched this: 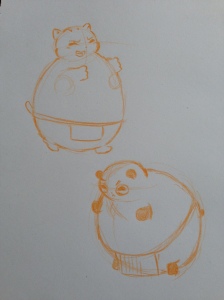 We started with a box model, of the basic game play. We simplified the controls to just tapping two keys alternately really really quick.

Oh yah, and as usual, I used Unity as my game engine, I was only on Basic, because I couldn’t remember which of my accounts had the Pro license.

I started with a 2 player mode, and then added a 1 player vs com mode.

And pandas have colors now: 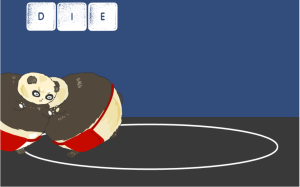 And then we decided that we’ll just stick to pandas. Just pandas. Because pandas are the cutest animals ever.

And then while my lil sis was drawing everything, I was voicing pandas. Saying things like “I’m so fluffy” and “I hate you.”

And then lots of UI:

I placed in the cool background music that I had been using for all my previous game jams.

Some more tweaks and we were done.

And we uploaded it.

On Sunday, we did laundry, and I baked cupcakes.

And I was going through the Game Jam Rules again, and read that all audio assets needed to be done within the 72 hours as well.

So I recorded some more nonsense as our background music.

And uploaded it again.

And since we still had a lot of time on our hands, we also made a trailer for our game:

By the way, the name of our game is “Fist of Furry”.

The important part is finishing a game in less than a weekend, and for people to play our game and appreciate its cuteness and soundfx.